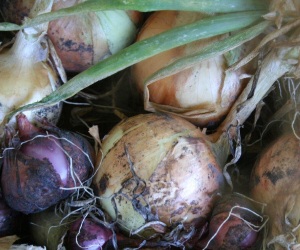 My knife never sings but hums instead when withdrawn from its block, a metallic whisper so modest only the wielder may hear it. Or perhaps the dog, who seems to enjoy the kitchen nearly as much as I. A Japanese blade, it’s a joy to hold, perfectly balanced, stainless steel-molybdenum alloy, blade and handle of one piece, bright, untarnished, and so sharp as to slide through, rather than awkwardly rupture and divide, its next task on the board.

We’ve never counted the chopped and rendered onions, the fine dice, slender rings and discarded skins, but if we could gather all the corpses we’ve produced together over the years, we’d form a monument to our work, cooperation of metal and man, a Waterloo mound in memory of the bulbs laid there, the planning involved, the missteps and serendipity, and the tears shed along the way.

The blade doesn’t care. It is. It works. It moves things, it lifts, it parts them, and in return is cleansed, and later, in the quiet room, maintains its edge with a silvery rasp, angled steel on steel in a circular motion, over and over, until finally it hums its way back into the block. But it never sings. 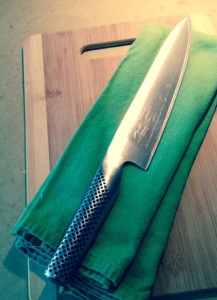 “Onions” last appeared here in December 2018. Hmm. This reminds me (again) that I need to sharpen knives…