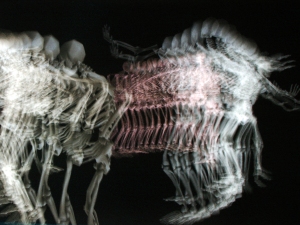 Sometimes the bone man clattered by, his horse-drawn wagon heaped high with the stripped remains of dismembered corpses, a cloud of flies in his wake. I would watch him from my perch on the hillside above the street, contemplating the wondrous creatures that could arise if only one possessed the imagination and ability to assemble and reflesh the various rib cages and skulls, the scraped and articulate bones and fragments stacked on the wooden bed. I never considered a destination, never thought to follow, but instead wandered elsewhere, down to the waterfront, or along Via Domitiana to Lago d’Averno, Hell’s entrance, not far, they said, from the River Styx.

Odd, I think, that I never once contemplated the various paths taken to bring that wagon before my eyes, to that very intersection, on those particular days. Nor did I wonder that it was drawn by muscle and sinew rather than engine, that its wares, while tarnished with dried blood, seemed curiously bereft of flesh and stench, and that its passage seemed unnoticed. Perhaps it was merely a parenthetical statement in the day’s phrasing, and I lacked the proper context with which to read it. Perhaps. But even at fifteen I knew that such sights were not long for my world.

Now, from this Texas hill, I listen to distant gunfire and wonder which bones will come my way, which offerings will appear at the roadside, what the dogs will bring. I have fifty-four years and much patience. The breezeway is lined with antlers. I wait, no destination in mind.

This prose piece was one of my first posts, and last appeared here in August 2017.