I’m pleased to present part 2 of the Q&A with poet Stephanie L. Harper: 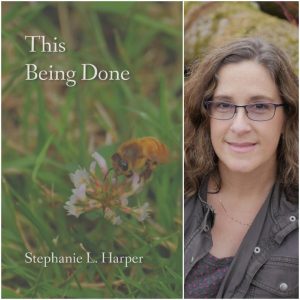 If you were a poetic form, which would you be?

I would be a poetic form that could seep down into darkness, molecule by molecule, through miles of porous rock, to return to the wellspring, then rise again to the surface, and wash over the grief-stricken with the all immensity of love and joy in my depths. I’m pretty sure that would make me an elegy.

What themes or traits will readers find in your work? What will they not find?

My work is chock full of mythological creatures, archetypal symbolism, and nature imagery (i.e., birds, seascapes, wolves, forests, volcanoes). It touches often on spirituality (and/or religiosity), sometimes alludes to current events (and associated dismay), and has an overall feminist and philosophical bent. My love for and awe of my children shows up a lot, too. Some of my poems address such uncomfortable subjects as child abuse and misogyny, but I try to avoid any superfluously vulgar or violent language. It occurs to me that I’ve tended to give the explicit erotic love bandwagon a wide berth, which I don’t anticipate will cease to be the case, but I suppose stranger things have happened…

It bears mentioning that on another given day, I’d likely have chosen three different poets, but it’s also true that anyone I’d think to include would be someone whose work I return to again and again.

Animal: I think animals, in general, are admirable for being better and more pure in every moment than we humans ever will be in our best, most authentic moments, but sometimes an animal will stand out for me as being exceptional, even by animal standards. One example that comes to mind straightaway, is a she-leopard whose brutal and remarkable story I once followed in a nature documentary. It was years ago, when my kids were still quite young. In one of the episodes, the leopard returned to her den to find that her cub had been swallowed by a giant python. Desperate to retrieve her cub, whom she must have known was already dead, she relentlessly attacked the python, issuing blow after calculated blow clearly designed to maim and traumatize the snake without killing it, so that it would regurgitate the cub, which it eventually did. The mother leopard then performed a harrowingly elaborate mourning ritual, during which she paced and mewled and roared, and ultimately ingested her cub, presumably to protect its body from the elements, or, perhaps, to achieve a final moment of closeness. In any case, that ordeal was devastating, nausea-inducing, heart-rending, absolute perfection, like nothing else I’ve ever witnessed. I still can’t recall or write about it without tears welling up.

Go-To Beverage: This is where things get really interesting! Sorry, NOT. I drink a cup of coffee with a splash of almond milk pretty much every morning. Without it, not only is my ability to interface with the world on a conscious basis severely impaired, but my chances of experiencing a raging migraine by late afternoon are increased by a factor of ten. That is all.

And your creative process? Could you offer us a glimpse into how your poems develop from first glimmer to fully realized piece? Do you follow a regular writing routine? Do you listen to music while writing? Write in public or in solitude?

There’s a ubiquitous voice out there in literary world that would have us believe no one can be a serious writer without following a strict writing practice. As someone who doesn’t operate well with routines (which is far from saying that I’m not a creature of habit, but that’s a story for another day), that’s always been a sore subject for me, and so I’ve done a lot of soul-searching about what does or doesn’t constitute success as pertains to who I am and what I do. For one thing, I’m learning that my tendency to get obsessive over whether or not I’m performing to some prescribed standard of “real poet” (as opposed to “full-of-shit pretender,” that is), is a recipe for performance anxiety tenderloins braised in a tangy reduction of doom. I suppose it’s true that a heaping serving of doom has on occasion successfully fed a convincing performance, but it’s not a sustainable diet for me.

So, while I’ve never figured out a methodical way to conjure creative output in written form “on demand,” I’ve come to realize that this fact doesn’t necessarily mean I’m any less invested in the work. I’m finally understanding that everything I do in the course of living (i.e., being in the world each day, reading, sharing in the joys, frustrations, and griefs of my family and friends, everything that goes into raising and championing my kids, even menial chores and any and all associated avoidance tactics, and did I mention reading?) is oriented toward the work of poetry. Eventually, invariably, the imagery-laden phrase-fragments I find myself chanting in the shower, or in the car, will rise to a critical point of insistence that they be born, obliging me to do something about it—a something which tends to involve either a journal, a screen, or the back of a receipt. Then, once such a creative burst has resulted in a new, nebulous little life-form, said infant poem may demand extensive attention in the way of crafting, cross-referencing, cajoling, and other various cerebrations over the course of months, or sometimes even years. Occasionally, though, a poem will learn as a result of my ministrations to pull off a pretty persuasive full-realization act.

Please tell us how or why you turned to writing poetry?

When I was a youngster, my teachers used to call me a “gifted” prose writer (go figure), and anyone who’s ever received a personal letter (whether in handwritten, or electronic form) from me would attest to my proclivity for words, and lots of them, but I’ve actually always preferred poetry as my vehicle for creative expression. I don’t believe I ever had a pivotal moment of “turning to” writing poetry, but rather, simply, that I am a Poet. It’s a fact about my life that it’s taken me the better part of my lifetime so far to figure out, but I’m learning that it’s more a matter of how I’m wired to relate to the world and others in it, than of my having chosen to practice one form of art over another.

I think of poetry as an attempt to account for and share the truth (in terms of emotional, experiential immediacy) as accurately and proximally as human language will allow, given that language can only at best be a pale stand-in for any actual thing we mean to express. Insofar as telepathy hasn’t yet evolved in humans to the extent that it could viably supersede our linguistic systems as the primary mode of communication, poetry strikes me as the closest we can get to understanding one another.

I am a Poet, not because I think there’s something special about me that I need to tell everyone, but because I’ve found nothing more fortifying and validating than those moments in which I’ve recognized myself in someone else. And so, what moves me to give something of myself to the world in the form of poetry, is not so much a hope of getting something in return, as it is of being a gift that’s received.

Would you mind sharing a bit about your background?

You might say that I’ve taken an anti-establishment approach to achieving Poethood, in that I never earned an MFA, or even studied in any writing program. But the truth of the matter is, my sans-MFA route was not for a lack of trying to pry my way into the establishment. When I was a senior at Grinnell College (IA), graduating with a double major in English and German, I applied to a boatload of graduate programs in creative writing. Several of my professors made a point of advising me against including any of my poetry in the writing samples I submitted with my applications, stating euphemistically that it “wasn’t ready.” The non-conformist in me did not heed, and did not prevail. A year later, stubbornly submitting more of my “poetry” with my applications to yet another batch of writing programs, resulted in more resounding rejections. I did, however, manage to find my way into one of the top Ph.D. programs in German literature in the country at the time, at the University of Wisconsin in Madison, where I studied and taught for four years while completing my MA, and two additional years of coursework toward my Ph.D. After the accrual of much debt, my life took an abrupt, yet immensely welcome turn toward marriage and motherhood. I’ve since made a show of pursuing other “respectable” career paths, including completing the prerequisite science courses for a nursing program I ended up not applying to, and a stint in theological seminary as a Master of Divinity candidate, during which time my son was diagnosed with autism, which suddenly made my true calling crystal clear… Societally-induced guilt over “wasting my education” be damned: I’ve spent twenty years so far as a Mother, doing exactly what I was meant to do—which, as it turns out, has amounted to a pretty stellar education in the poetic arts…

This concludes our Q&A, but while you’re awaiting your copy of This Being Done (the pre-publication sales period ends April 27), you might read Stephanie’s poem “How to Be a Malacologist” in Panoply, or visit her blog.