If all our voices were to meet in the atmosphere
what could the rain achieve?

When we give nothing we have nothing.

Is it enough to listen?

Wisps and heaps, ripples and sheets.

in caution, in delight,
imagining the greatest undoings.

“Awaiting Thunder, He Dreams” was first published in Red River Review, in August 2018.

My last five posts of 2020 are reruns of five of the most viewed posts on this site during the year.

Never rooted in Tibet,
has not watched a whale breach
a November Pacific dusk, or guzzled
bitter beer near Vesuvius. Nor has it
absorbed the warmth of a loved one’s
hip on a frozen morning long after
the embers’ glow has greyed
and the windows blossomed
white. It cannot know the beauty
of disparate instruments playing
in joyous harmony. It will whisper
no incantations, does not smile,
won’t ever feel the anticipation
of a first kiss after a complicated
courtship. The bouquets of Bordeaux
elude it, as do tears or the benefits
of laughter. Why, then, do I envy it so?

“This Oak” was published in Slippery Elm (print only) published by Findlay University in Findlay, Ohio, in spring 2019.

These quiet days are ending
and now I must leave.

eased each other’s burdens on this road.
True friends are scarce in life.

I should just stay there alone, forever
behind the closed gate.

“Parting from Wang Wei” is included in my micro-chapbook, No Eye But The Moon’s, available via free download at Origami Poems Project.

Jenny Enochsson, editor of Tistelblomma, an online journal based in Sweden, asked me a few questions… 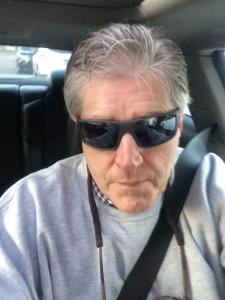 Letter to Geis from This Side of the Glass

Dear Greg: I can’t help but think about windows, their
function, their meanings, intended and otherwise, how
they block some entities but allow others entrance. A
black vulture feather lies just on the other side of this
pane, but the laws of material and physics prevent me
from reaching through and claiming it. Maybe I’d
sharpen the end, dip it into squid ink and write letters.
Or not. Cephalopods are scarce in the hill country,
unlike carrion birds, wild hogs and scorpions, and frankly,
ballpoint pens require less maintenance. Lately, the
opaque has redirected my attention — no matter which
government agency speaks, I feel surrounded by their
pseudomorphs, those little indistinct clouds of mucus and
dark pigment released to confuse and numb me. A common
occurrence, I hear, and all the more frightening for it. I
think of where we’re headed, collectively and individually,
and even knowing that our destination remains unchanged
offers small comfort. One foot at a time, the steps matter,
and though it appears we won’t share those planned brews
in Bandera, I’ll chuckle over our last meeting there and
dream up a conversation about futility and compromise,
and yes, success. I’ve just spent twenty minutes trying to
help a yellow jacket escape. It wouldn’t leave the glass even
after I left the door ajar, allowing a fly to enter. Instead,
it gazed out at the hazy morning, seeking a way through
refraction’s oblique path. Finally, shepherded with my bare
hand, it reluctantly skittered to the jamb, and I coaxed it
the final few inches by pushing it with the door. Such
are my days. A little faith, some hope, luck and a great
unknowing. This window seems cloudy, or is it just
my eyes? I miss you, buddy, as do the hills and the sky
and everything nestled and bustling between.  Bob

This first appeared in May 2020 in the Taos Journal of International Poetry & Art. D.G. Geis was a friend, a larger than life  poet, and a fellow Texan. We were both finalists for the Slippery Elm poetry prize in 2017, and after learning that we didn’t win, decided to have a “losers’ lunch” in Bandera, Texas, the closest town to our respective rural properties. Much laughter ensued, and we made plans to get together for a beer in the coming months. Alas, that was not to be.

I flow over the ground,
healing its hidden scar–
the scar is black,
the bedrock risen,
not one stone is misplaced.

I relieve the ground’s
burden with white froth,
I fill and comply—
I have thrown a pebble
into the night,
it returns to me,
settles and rises,
a white dove.

“Calm” is included in my micro-chapbook Only This, which is available via free download from Origami Poems Project. It made its first appearance here on the blog in March 2015, and was written as an exercise, using a poem, “Storm,” by H.D. as the launching point. I’ve tried to emulate her diction and rhythm, with mixed success. Still, it’s fun to try these on occasion.

Looking for something to read during the pandemic? Charlotte Hamrick asked writer friends for recommendations. Scroll down to read mine: https://zouxzoux.wordpress.com/2020/10/27/pandemic-reading-writers-share-their-picks/

Michael, when you say moons do you see
cold stone floating in the firmament
or phrases frayed in the mouth and spat on paper?
And does the Spanish moon simmer at a similar
pace to mine or yours? Which embers blush brighter?
But let’s turn to estuaries, to salt and clamor and gun-
running poets and interrupted words sold in stalls
between parenthetical gates, to incomparable cavas
and the deterioration of envy and intervening years.
Or perhaps mislaid passion – a friend claims love
is merely a bad rash, that we scratch and scratch
and inflame but never truly cure what ails us. Sounds like
politics to me. Or sports. And business. Or neighborhoods.
On my street people should cook and play music together,
laugh, raise chickens and read good books. They should
brew beer, swap tomatoes, recite each other’s poetry and sing
in tune. But we’re different here, preferring instead electronics
glowing in dimly lighted rooms. I reject this failure, as I also
reject the theory of centrifugal force spinning off the moon’s
body from the earth’s crust, preferring to imagine a giant
impact blasting matter into orbit around what morphed into the
earth, and somehow accreting the stuff into this orb we
sometimes worship. This, to me, is how good relationships
form: explosions of thought and emotion followed by periods
of accretion. But what I mean is I hope this finds you well
by the river of holy sacrament. Remember: brackish water
bisects our worlds. Turn. Filter. Embrace. Gotta run. Bob.

Originally published in Heron Clan 3, this first appeared on the blog in July 2015.

My friend Michael occasionally sends hand-written notes or letters to me, and I respond with poems. This is one. You might read some of his writing at Underfoot Poetry.

Looking for something to read during the pandemic? Charlotte Hamrick asked writer friends for recommendations. Scroll down to read mine.

With the pandemic now (arguably) in it’s 8th month, I’ve been noticing lots of talk about books on social media. It looks like reading is enjoying a boom and that’s a good thing! In the past few months, though, I find that my reading choices are pickier than usual. Memoirs and Poetry are probably my favorite genres but I have loved a good dystopian novel (read Blindnessby Jose Saramago or Station Eleven by Emily St. Mandel). However, I seem to have lost my taste for the dystopian in books and in tv. When I try to read or watch, I get a lump in my stomach and have to stop. It got me wondering if anyone else is feeling this way and if the pandemic has affected others similarly. I’m always interested in what others are reading so I thought I’d ask some of my…

I Live in My Winter

Removed from the junipers’
fragrance, separated from
prickly pears gracing
the hill, limestone slabs
jutting from thin soil,
and smoke drifting from
a well laid fire on a cold
night. Old, today, I
call the clouds my
birthright, want only
to merge with them
and rain through
another black coffee
in this unfamiliar place,
this new home,
this welcome peace.