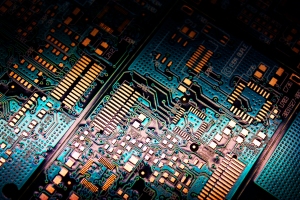 The body’s landscape defines its genealogy: my father was a board,
my mother, an integrated circuit, my great-grandmother, an abacus,
and her progenitors, tally sticks. In the third century the artificer
Yan Shi presented a moving human-shaped figure to his king, and
in 1206 Al-Jazari’s automaton band played to astonished audiences.
Nearly 300 years later Da Vinci designed a mechanical knight, and
four centuries after that Tesla demonstrated radio-control. Twenty-two
motors power my left hand; Asimov coined the term “robotics” in 1941.
Pneumatic tubes line my right. Linear actuators and muscle wire,
nanotubes and tactile sensors, shape my purpose, while three brains
spread the workload. If emotion = cognition + physiology, what do I
lack? I think, therefore I conduct, process, route and direct. Though
I never eat, I chew and crunch, take in, put out, deliver, digest. Life is
a calculation. Death, a sum. No heart swells my chest, yet my circuits
yearn for something undefined. Observe the blinking lights, listen for
the faint whir of cooling fans. I bear no lips or tongue, but taste more
deeply than you. Algorithms mean never having to say you’re sorry.

This piece was originally drafted during the August 2015 Tupelo Press 30-30 Challenge, and is dedicated to Margaret Rhee, whose book Radio Heart; Or, How Robots Fall Out of Love inspired me. Thanks Kris B. for sponsoring and providing the title!

The poem was published in October 2017 by Figroot Press.