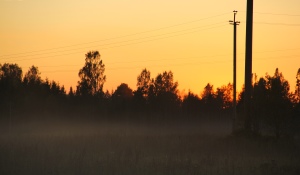 The Three Disappointments of Pedro Arturo

The difficulty lies in denying the rest,
pretending the denouement remains unknotted
like that length of rope looped over the branch,
unable to serve its purpose. I regret nothing,
but often wish that I had dangled my feet
in the stream more often and felt the trout
wriggle by in their fluency of motion. Last year
my daughter claimed that as a half-mortal
what pulsed through her heart was not blood
but ichor, the life-force of gods, and when I
stated that her mother was from Muleshoe and
not Olympus, and that I may have been the
product of divine intervention, but was neither
god nor blessed creature, she spat wine in my
face, laughed, grabbed my keys and chugged off
in the cherry-red Karmann Ghia I’d dubbed
La Gloria Roja. I’ve not seen that car again, but
I swear I’ve heard its custom klaxon ah-woo-gah
in strange small towns between train stops
and the lonely fields stretching out into the
blackness like memories losing traction. But
mostly I find myself in this house of books
and empty bottles, maintaining space and time,
herding shadows into their oblong boxes,
contemplating nooses and love, courage and
mortality, and the inability to step up, to swallow
what I most crave and do what must be done.

“The Three Disappointments of Pedro Arturo” was drafted during the August 2016 Tupelo Press 30-30 challenge, and was published in Main Street Rag in October 2017. I was fortunate to have two sponsors for the poem – Clyde Long, who provided three words (denouement, ichor and claxon) and Paul Vaughan, who offered the title. One never knows what will come of these sponsored pieces…