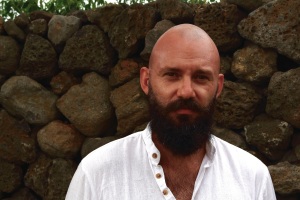 Daniel lives on the island of Jeju, a self governing province of Korea, where he lives with his wife and dog and runs a guesthouse and cafe. When he isn’t cooking omelets or pasta you’ll find him by the sea searching for mermaids, fishermen or something peculiar, or just waiting for Jeju to come to him with poetry.

RO: What is the relationship of your environment, your daily surroundings, to your writing? What themes or traits will readers find in your work? What will they not find?

DPM: My environment, for the first time in my life, is the fuel for my poetry: if not for Jeju, i’d never have thought to make a character of myself, never would i have thought that my experience was of value, i’d never have cottoned on to using the environment around me rather than failing miserably to imagine or research a place i don’t know all that well. It sounds ridiculous, but the grass is always greener over there. i don’t like that proverb, but i succumb to it against my better judgement.

Jeju is split between the tourists & the locals. The tourists usually come from Seoul, are quite affluent & modernized. They zip from A-B, snapping selfies then rushing to the next place. It is uncomfortable watching them sometimes, how desperate they are to do as much as possible & never pausing to reflect or take in something first hand. This isn’t everyone, but it is a common feature of my day to day life: photo food, photo this, then that & not doing it with any attention, just point & click, a document to say I was there. i don’t get it, but i think conversation is for this. i just don’t get that sort of passivity when experiencing anything, it’s all we have.

The locals just work. If you don’t keep your eyes open you could miss them, huddled, retired over their task, in the fields. They look worn, disheveled from a life of wind, salt & soil caked hands. But they are strong, despite their average age being over 70.

Dichotomies expand into other areas, however the foundational essentials to spring board from are: people; weather, the effect of the elements on things, which is so noticeable on an island, knackered stuff, rust, debris outworn objects generally; work, hardship; abandonment, isolation, affluence, wastefulness, abundance, nature thriving in unlikely places, the ocean, critters, food, booze, nature generally- all are recurring themes along with whatever their opposites may be & the conflict or desire for resolution that i may be tousling with in my opinion attempts to clarify my position. i find having an opinion on anything difficult as someone can always counter it, we live in a Sophistic world.

Halla Mt, which is Jeju is always in the background & is frequently present in my poems too. The weather here is Bi-polar & it is just not possible to leave it out, especially as it seems to have done so much to the people, bringing them a rich soil & hard toil.

The mermaids too, the Haenyo, are a recurring feature; women who forage abalone, conchs & various mollusks, by hand, free diving, without oxygen, in all seasons. Their abilities, according to my friend who blogs at wearepagans.wordpress.com about Jeju shamanism, are similar to Wim Hof’s cold endurance. The tradition is 1500 years old & only their attire has been upgraded: they now have wet suits.

i knew when i started writing about Jeju that i wanted recurring themes, motifs is probably more apt. After reading Walcott’s White Egrets, which has some wonderful motifs, i knew i could do something similar with Jeju.

Alcohol: Jeju fishermen, construction workers & farmers like to drink, not like, need to drink. Soju, a non-distilled spirit & makkoli usually crop up in the poems as they are drank at all times of day. Makkoli is especially popular & useful as it is made with just fomented rice & tastes good. After a bottle you get a surge of energy & both fight off the numbing cold wind of winter. The chap who did our electrics during the construction of our guesthouse would turn up, ask for a bottle of makkoli, get it down him in three bowls, one gulp each, then & only then would he start any work. For lunch despite rice, soup & side dishes on offer, he would eat just a few mouthfuls of green onion kimchi & a bottle or two of makkoli. i asked if he ate or drank anything else, he said no. He worked damn hard & even though pushing 70 he looked much younger & suffered from no ill health.

Drinking in Korea is just part of life, there are no taboos really, i can’t really think of any, even women get shit faced.

As to what you won’t find here, i suppose you won’t find a lot of comfort because comfort is a dichotomy of so much discomfort; so my mention of it will usually be focused on the irony. i have never been interested in the usual comforts people feel they need or deserve. i have never lived in a nice house or flat, never had a nice comfy bed. i have always made do, because that is how i like to live. If i wasn’t like this i could not have built a guesthouse, i could not endure the loneliness i have lived with nor take leaps in the dark.

i can’t really appease this yearning after comfort, as i am in direct contact with local people every day, i live in a house like theirs, i work as much as them (not as hard) & though i don’t pity them (they don’t require it, they aren’t vulnerable, they make do with anything) i can’t help but see that tourism, which is an industry that designs retreat into comfort (because that is what people deserve) is responsible. You can learn a lot about what you really need in life from these kinds of people.

This is a tousle with myself too, a tousle with the guilt i feel for using good land to shelter the hordes of tourists which have encroached on the local people’s lives with so much disregard. Yes tourism creates work, but it also means mass development & pollution & the buying up of land for monstrous development projects. For example, from the tea fields, you used to have an unobstructed, incredible view of Halla Mt, the serried contours of tea bushes rippling to the horizon & in the background, Halla. Then someone thought it a good idea to build a science park, space museum, a superfluously big, ugly, grey, eye sore that completely blocks the once dramatic spectacle. i can’t forgive the (list of expletives) persons who have done this. It is the fate of this island. & i just worry what will happen when there is no construction work left to be done & all the workmen & companies that have prospered have no work: will Jeju go beyond its means to accommodate the loss or will they have to exodus to an already ballooning Seoul? The companies will have to lay off a lot of working men. That day isn’t more than a decade or two away.

My wife always says Jeju will be like Elysium, not the Greek sort, the Matt Damon sort. We may think Elysium is a natural progress of society, but it doesn’t have to be, a constant agitation to get more comfort is just daft. Experiencing a little discomfort, even hardship & spending the emotional expense it takes to overcome teaches you a lot about yourself you never knew; you may have to experience anger, depression, sadness, loneliness, but you’ll have these emotions with equal amounts of ecstasy, bliss, & joy- how boring would life be if you were just happy all the time? Think of all the great works of poetry & how much variety of emotion is there.

RO: And your creative process? Could you offer us a glimpse into how your poems develop from first glimmer to fully realized piece? Do you follow a regular writing routine?

DPM: My poems always get written on the move. i am almost always doing something else, with poetry in my thoughts. i never let my focus on the external falter, it is always on the alert for potential effects on the internal, or for a possible conversion into a poem. If you want to be a poet & you’re relationship between the implicate & explicate orders (to lend Bohm’s terminology) are out of synch, then you best sort it out else the poetry is going to suffer.

Sometimes, it is just one of those flashes, which Nabokov so elegantly has John Shade soliloquize about in Pale Fire, or what Heidegger called the grant. Without these moments of constructive, economic, inspiration a poem isn’t really complete: i am very uncomfortable with a poem i have thought my way through too much. Those sorts of flashes are indicative of the feeling of the poet to roll out something that has a direct appeal to sense, & sense has peeled away at; a line only that poet could have written, because it comes from a portion of themselves that is unique to their mind, as if every experience was being granted the status of original & new, therefore the line comes out uninfluenced by another thing, person, poet, anecdote, from anything at all. Hart Crane for me is the master of this & Michael Symmons Roberts too. You just need one of these, they are the herbs & spices of poetry.

Once that first flash of a line or idea arrives, there is usually a concatenation of ideas relating from it, like a spider diagram that comes in fits & starts over the space of anything from a few hours to days. If this doesn’t start to happen, i will give it a few days, even a week depending on the strength of the theme or line, but if nothing develops it gets relegated to my fragments, in case i get deja vu at some later time & realize an experience relating to that moment has sprung the long abandoned attempt into action.

If in my pocket notebook a good chunk of poem gets out of me, i’ll start to craft. i seldom craft on the move, this is the time where i have to sit down & copy what i have out, because when the lines appear they often appear in form, there is already metrical stability in them, but they are a jumble in my pocket notebook. i copy them out into a manuscript sized book to give myself space to breathe- to hurry out alternative lines, test synonyms, antonyms, similes, grammar, punctuation. If i can spot that i have organically used quite a few end rhymes, the poem may get mashed into something lyrical. Once i’ve rearranged & tormented the work enough i type it up onto the computer. Each time the poem is moved through this progression, a word, or the line breaks get altered & even a few days to a week after the poem has been typed i read over it closely, read it out loud, live with it to make sure it is as it should be. i don’t think i can say that, there can always be rearrangements, Auden was right, but you just have to call it a day or you’ll nitpick. If Dylan Thomas hadn’t been so finicky, he could have written many more high quality poems, but he spent so much time agonizing, fastidiously over his vocabulary choices; it is easy to align this attention with the standard of poetry, but i do think it can become a burden on productivity.

This method works for me, it has something of the production line about it, but like the sieve that captures all the chaff, so my movement of the poem through stages means i can construct the poem cautiously.