Welcome to “Sunday Compulsion,” in which creatives answer one question: Why do I create? Poet Devi S. Laskar kicks off this new weekly feature.

I’ve been writing poems since I was 9 years old. It’s who I am: a poet. I write nonfiction and I write short stories and novels and I do so because I have this desire to communicate. I am interested in all kinds of forms. And I love to read, which is probably why I live to write. I’m trying to write the stories and the poems I haven’t read yet.

Devi S. Laskar is a native of Chapel Hill, N.C. She holds an MFA from Columbia University in New York, an MA in South Asian Studies from the University of Illinois at Urbana-Champaign and a BA in journalism and English from the University of North Carolina at Chapel Hill. A former newspaper reporter, she is now a poet, photographer and artist. Her photographs include the cover of The Florida Review; and in the pages of Tiferet Journal and Blue Heron Review. Her art can be found currently on the cover of L.A. based Las Lunas Locas poetry anthology. Her poems have appeared in numerous journals including The Blue Heron Review, which nominated her for Best of the Net 2016 & The Raleigh Review, which nominated her for Best New Poets 2016. She is an alumna of both TheOpEdProject and VONA/Voices, and served as a Tupelo Press’ 30/30 Project poet in December 2015. She is also an alumna of Hedgebrook, and poetry workshops at the Community of Writers at Squaw Valley. In 2016, she won first prize in poetry at the 27th Mendocino Coast Writers Conference contest. Finishing Line Press published the first of two chapbooks, “Gas & Food, No Lodging” in March 2017; and will publish “Anastasia Maps” later this year. She now lives in California.

You can get Devi’s book Gas & Food, No Lodging at Finishing Line Press and Amazon,
as well as Bookshop Santa Cruz and online at Barnes & Noble.

Read and listen to her poem “Unanswered, Untranslatable”

To learn more about Devi, visit her website, which includes links to her artaday, essays, and various publications her work has appeared in. 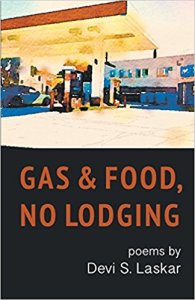 7 thoughts on “Sunday Compulsion: Devi S. Laskar (Why I Write)”