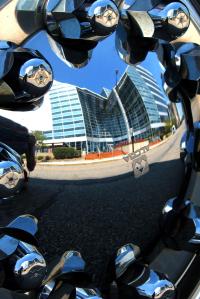 At Work I Stand Observing My Diminished Self

Six iterations, alike but lessened in sequence, and always in pairs:
front and back, oblique, the two mirrors becoming four, then six.

A perfect mirror reflects and neither transmits nor absorbs light.

Tilting my chin, I accept reflectance according to its distribution.

The images consume no space but the effect is of distance.

Vision is not simply the retina’s translation
but counts inference and assumption among its influences.

Turning slightly, I detect movement in each replica.

A six-door cubic cage depicting the bondage of sense and elements.

It is possible to withdraw from this frame.

Does the weaker eye perceive less.
Who conceals the shadow’s death.
Is a distal truth a lie or merely implication.
How do you rid the mirror of its ghosts.
What resonates in the echo’s decline.
Did the light switch subvert the blackened image.
Apparition, projection or visual representation.
When do waves not disturb.
At what point does belief transmute sight.
What fixes the mirror’s image.
Who closed his eyes and saw light.

I sip coffee and gaze out the second-floor window.

More light enters my neighbor’s office than mine.

Calculate the difference between illumination and glare.

Looking ahead, I claim no face and recognize no one.

The eye converts a signal from one form of energy to another.

Accepting light from external objects, I perceive reflection as the true arbiter.

Face as identifier: to make, to do.

“At Work I Stand Observing My Diminished Self” was published in Posit in October 2017.

4 thoughts on “At Work I Stand Observing My Diminished Self”