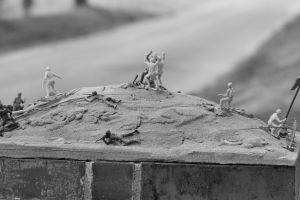 We presume affliction by census,
whereas light

requires no faith.
Is the roofless house a home? When you call
who answers? The vulture

spreads its wings
but remains on post. Shifting,
I note minute of angle, windage. No

Many thanks to Judy Dykstra-Brown, who invited me to tag along on this Poet’s Writing Process Blog Hop. Judy is an amazing person who was raised in South Dakota but has lived in Australia, Ethiopia, Wyoming, California, and Mexico. She has four books available on Amazon in print and Kindle versions, and you can find her blog at: http://grieflessons.wordpress.com/

You’ll find my responses to the process questions below, but first I’d like to introduce you to two of my favorite poets, Ron Evans and Jeff Schwaner. At first glance (or second, third, or twenty-fifth) one might question the logic behind placing two such different poets in proximity. Ron Evans focuses on short pieces – mostly haiku, tanka, and senryu – while Jeff Schwaner, well let’s just say that some of Jeff’s titles consist of more words and syllables than any ten of Ron’s poems combined. Yet their work shares those universal qualities that comprise the best poetry – pathos, empathy, wonder, humor, profundity – combining them with artful craft, precise language, and more importantly, sufficient space to allow their readers to explore the work.

Ron is a retired editor, father and grandfather, published poet, author of one book of his collected poetry, amateur radio operator, ex staff member of Lowell Observatory and Hat Designer Emeritus for Minnie Pearl. (Google it if you dare!) Ron has also done a pot load of other stuff in his 73 years, some of it legal, all of it fun. He lives with his wife and dog in north-central Texas where he bides his time writing haiku for his blog and working on a book of his haiku to be published this millennium.

In a recent haiku, Ron evoked a vivid picture of the aftermath of a summer rain. In this brief piece, I experienced: a back porch in the late afternoon, a brief but heavy rain shower, perhaps just a day or two after mowing, smells associated with rain and vegetation and hot pavement, the realization that the lawn will need to be mowed again, in just a few days, because the damned drought-adapted weeds shoot up so quickly after a good watering, and the humorous contradiction of cursing much needed rain because it also benefits the weeds. And of course Ron accomplished this with just six words (he’s very annoying in that way):

downpour
listening to the weeds
grow

Jeff Schwaner lives in the shadow of the Blue Ridge mountains in Staunton, Virginia, with his wife and family. He’s published five books of poetry; the work in progress, The Drift, is what is being seen in draft form on his blog, poem by poem as he writes it, with plans to have the book out late 2014 / early 2015. All the books are self published, and he has something of a history as a trailblazer in that area, having co-founded the print-on-demand sites Greatunpublished.com and Booksurge.com in 2000, which was later acquired by Amazon in 2005 and merged into CreateSpace. St Brigid Press in Afton VA has published a few curiosities of Jeff’s, including the broadside “Drop Everything,” the haiku drink coaster set “Night Walk on Cape Cod” and a translation from the Chinese of Tang dynasty poet Li Ho entitled “Sky Dream.”

Jeff has the inconsiderate habit of writing lines that I wish I’d written. In his 14-line poem “Mei Yao-Ch’en and I, Both Approaching Fifty Years of Age Though He Has Been Dead for Nine Hundred and Fifty Two Years, Discuss the Poetics of Getting Older and Apprehending Death, After Which He Wonders How Much of This He Will Remember When He Returns to the 11th Century and Decides to Write to Hsieh Shih-Hou on the Inside of His Robe So He Can Take it With Him Even if Memory Abandons Him, but It Comes Out in the Wash After I Copy It Down, Even In The Gentle Cycle,” he shoves me through envy’s doorway a half-dozen times, starting with “Is it any wonder we drink wine under the waxing moon/but feel the weight of its dark side which will only grow?” and culminating with “Still my host/does not know when black drift’s wave/becomes the shape of his boat and he sinks into night…”

To share in this envy, see Jeff’s blog, Translations from the English, at http://jeffschwaner.com/.

I was asked to answer four questions that I believe Ron and Jeff will also answer, in some form or fashion at a later date.

What am I working on? I generally have many pans on the fire, with probably a dozen pieces, perhaps more, in various stages of completion at any one time. These range from adaptations of short poems by T’ang Dynasty poets Li Po, Tu Fu and Wang Wei, to a series of self-portraits, a few elegies, and several longer poems that I’ve been tinkering with for the past few years. I’ve also a couple of chapbook manuscripts making the rounds, and hope to finish a full-length manuscript during the next year or two. I’m not in any rush to get these out, but at the same time it would be nice to “complete” something.

How does my work differ from others of its genre? That’s a difficult one to approach. But with regards to the poetry, perhaps I leave just a little more space, more room for the reader to fill in the blanks, than some do. I’m more interested in unearthing the connections, the relationships, between seemingly disparate entities than I am in providing detailed, cohesive narratives. Thus a single 16-line poem may mention the letter “W,” the Roman Empire, Baudelaire, water, Woden and the concept of lost perfection. I also tend to examine the ordinary, the prosaic bits of daily life, through a slightly fogged lens, and I take great delight in dipping into the history of a subject and extracting interesting tidbits, in order to frame, to my satisfaction, relevant questions.

Why do I write what I do? The facile reply is that it’s easier to write than not write. But it all comes down to learning: I enjoy the process of learning. And writing what I do, the way I do, demands exploration into areas I know little about. So it’s self-indulgent yet edifying. I’m playing, massaging my curiosity, and adding, bit by bit, to the motley toolkit accumulating in my brain. My natural impulse is to try to assign meaning, to organize that chaotic assemblage. Hence the writing.

How does my writing process work? I haven’t the foggiest. Basically it consists of butt in chair, books at hand, and a word or short phrase that’s gnawing at my innards. That one word or phrase prompts another, then another, then likely poses a question requiring me to research (albeit lightly) something that darted out from a dim corner of my mind. Thus examining the etymology or definition of a word may prompt an investigation into, oh, something like Shintoism, which veers the poem down a new, nearly deserted alley where torii, god-shelves and kami exist. I follow these diverse paths for a while, and then attempt to arrange them into a (likely) non-sequential yet somehow sensible (if only to me) order. This may seem chaotic to you, but I find it comforting. 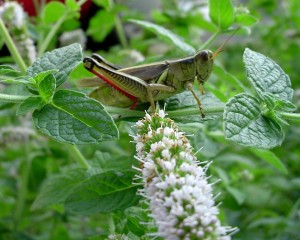 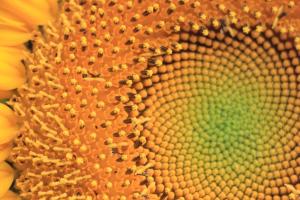 Passion to hope,
fingertips to
lips. Some bud

easily, others
struggle. A little
water, light, a kind

voice. Sometimes so
little achieves
so much. Yesterday’s

sunflower droops on
the sill. Today’s promise
arrives with rain.

The ninth of a series of twelve, originally published in the anthology Terra Firma.

Having no body to feed, the framework
claims a separate view, that of
passage, as in a delicate

vein, or sound trembling across the pond,
a languid flow so casual as to dissipate
unnoticed. The newest hour

replaces the last and so forth, leaving
the space unfilled, a house, roofless,
rain, desperate without water.

The incomplete, the structure of the void. 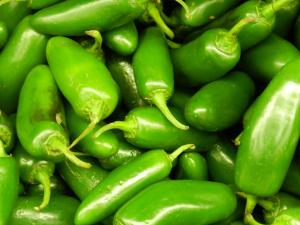 The eighth of a series of twelve, originally published in the anthology Terra Firma.

Edges, rounded
and grown thick
as if to accentuate

the merit of flavor,
or to imply, beyond odor,
the sublingual text

of heat and degradation, the
eventual disposition attained
and perhaps forgotten.

These two pieces were written about a dozen years ago. Unlike most of what I write, they emerged quickly and whole, appearing on the page then almost as they do now in Eclectica. Not trusting the ease with which they’d slipped into existence, I set them aside, intending to return to them with a new eye at some point. A few months ago, while digging through a pile of fragments and unfinished pieces, mostly crap, I must admit, these popped up. They’re okay, I thought. Better than I remember. So I dusted them off and released them into the world.

If you have the time, you might read poetry editor Jen Finstrom’s section in “From the Editors.” http://www.eclectica.org/v18n3/editors.html She discusses her selection process, how the work in each issue seems to find a common thread – perhaps an image, or theme – and that she looks for these connections. Oddly enough, in this issue, two poems bear the same title, “Memorial Day.” One of them is mine. 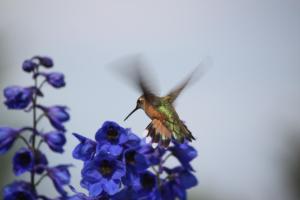